Axle Scales: 3 Options, Which One is the Right One for You? 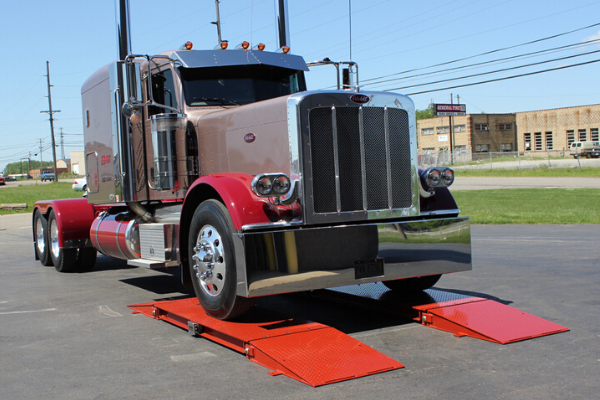 Axle scales come in various shapes and sizes to accommodate a wide variety of applications. Typically, they are used at operations that do not sell products by weight but need to know what the vehicle axle and total vehicle weights are to assure they are within legal limits. The Federal Highway Administration enacted the Bridge Formula in 1975 stating gross vehicle weight is limited to 80,000 pounds with single truck axles having a 20,000-pound limit and tandem axles limited to 34,000 pounds.

Truck axle scales are not considered a legal for trade weighing method because it is considered split weighing. Questions raised concerning split weighing date back to the 1930s when vehicles would exceed the scale platform length and “split” weigh thinking this determined the total vehicle weight. This is in fact, not acceptable practice per NIST (National Institute of Standards and Technology). For reference, here is the 2020 version of the NIST Handbook 44.

1.      Freight Terminals: Regional operations, for example, that load and unload semi-trucks with goods for distribution to local point of sale locations such as grocery stores or fast-food restaurants.

2.      High Commercial Volume Roadways and Ports of Entry: Interstate highways, international border crossings and points of entry to the United States from Mexico or Canada.

3.      Commercial Fleets Operations: Service operations where trucks are loaded with various items and equipment for site work such as service vehicles for power companies with spools of cable and earthmoving equipment.

4.      Temporary Job Sites: Such as a demolition site where debris is loaded on trucks and weighed upon exit from the site.

5.      Remote Loading & Unloading Operations: An example of this would be a forest thinning operation that moves locations throughout the forest as work is completed and scales need to be relocated to weigh loaded vehicles and accommodate efficiency objectives.

There are many variables to consider when selecting the right axle scale for your operation such as cost, portability, accuracy, and efficiency.

1.      Pit mounted, static weighing axle scales provide the highest level of accuracy because the weighing surface is at the same plane as the grade surrounding the scale, and the truck is stable during the weighing cycle. The cost to implement one can be relatively high due to the need for the pit construction.

2.      Pit mounted, in-motion axle scales improve efficiency, allowing axle weights to be captured when the vehicle is moving along a drive path, without stopping to capture weight values. Costs include the pit construction, but also the controller, or scale indicator, that calculates the weight value via a processing algorithm. The FORCE 1 truck axle scale is a top choice, allowing your fleet to quickly and accurately measure loads in motion.

–         Traffic lights to signal drivers when to move on and off the scale to weigh every axle set of the vehicle being weighed. These can be manually operated by a scale attendant or controlled by a pre-programmed unattended kiosk.

–         Unattended kiosks that not only control a traffic light but also capture the weight data from the scale. Information that is required by the operation about the driver such as the name of the hauler, driver name, or truck number can also be recorded and provide a printed ticket when the weighing cycle is complete.

–         RFID tag readers that automatically capture pre-loaded information on RFID cards or tags such as truck number, driver number, or company name. RFID tag readers are optimal for operations that run their own captive fleet of vehicles and drivers because issuing RFID cards and tags are unmanageable for operations that are open to the public or are open to any number of haulers.

–         Scale Data Management Software that captures weight values and any other associated information captured during the weighing process.

Axle scales are ideal for capturing axle weights and estimating total vehicle weight. They are also excellent for locations where space is limited, and a small footprint is required for reliable, accurate performance. Southwestern Scale offers a range of options including above-ground portable or pit mounted designs, static or weigh-in-motion and portable truck axle scales.

Southwestern Scale provides heavy-duty truck axle scales that are built to industrial field specifications and designed to withstand any climate and are offered in a wide variety of sizes, configurations and weight capacities. Contact a scale expert today to help you determine the weighing system option that is best for your business. If you already have an axle weighing scale or axle weighing system in mind, contact sales for truck axle scales for sale at scaleinfo@swscale.com or by calling (602) 243-3951.